Body: Maple back and sides

Notes: Originally shipped in 1930, this 16-inch L-5 is now fitted with a Gibson Johnny Smith style neck and fingerboard. According to its current owner, the guitar was re-necked at the Gibson factory in the 1970s and at the same time, the top was replaced. The original serial number is stamped on the back of the headstock. Note the five-piece headstock motif, split-block pearl fingerboard inlays, single bound f-holes and Kluson Sealfast tuners.

Like a Gibson Johnny Smith model, the guitar now has a 25-inch scale length and the bridge has been re-positioned to accommodate this (all 16-inch L-5s were built with a 24 3/4 inch scale).

A metal plate displaying the former owner’s name replaces the Johnny Smith tailpiece’s original ebony insert. In addition, the guitar has been fitted with what appears to be an early version of the Gibson Citation pickup.

Today the highly figured maple back and sides are all that remain of the original instrument. Despite this, it is still a beautiful guitar with an interesting, if somewhat chequered history.

Though we have included this guitar in the Type Two Gallery it is impossible to say whether it originally had dot or block fingerboard inlays.

With thanks to Ruurd Feitsma of the Dutch Archtop Guitar Museum

Greg Buchanan of Boise, Idaho USA, tells us: “I recently purchased this guitar from Ruurd Feitsma of the Dutch Archtop Guitar Museum.

“I have made the following changes to it: I replaced the Kent Armstrong pickup with a Vintage Vibe Charlie Christian floating pickup and fitted an authentic style tailpiece insert.”

Image above courtesy of Greg Buchanan 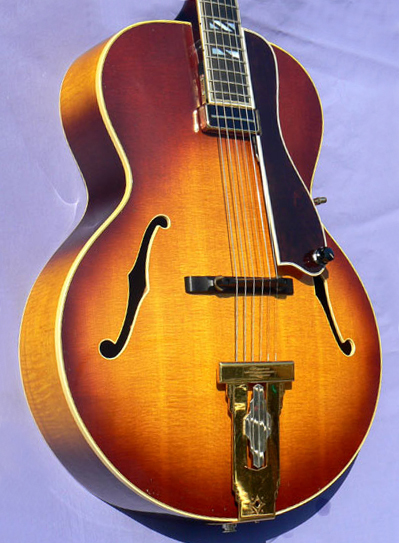