In Part One of our feature on Eddie Lang’s guitars, luthier and guitar historian Todd Cambio looked at the instruments played by Eddie Lang before he settled on Gibson guitars in the mid 1920s.

In Part Two, which appears below, Paul Alcantara focuses on the Gibson L-4 and L-5 archtops that Eddie played from the mid 1920s until his untimely death in 1933.

Eddie Lang appears to have adopted the Gibson L-4 somewhere in the mid-1920s. The L-4 was the most expensive six-string guitar pictured in Gibson’s catalogue N of 1923 (catalogue N includes the F-5 mandolin but makes no mention of the L-5 guitar; despite the fact that the earliest documented example was shipped in 1923), the model isn’t mentioned in Catalogue N). Lang wasn’t alone in using this model in a jazz context – Fred Guy, guitarist with Duke Ellington’s Washingtonians, was also pictured with an L-4 and Nick Lucas appears in the above-mentioned catalogue N with an L-4.

On the evidence of period photographs, Eddie Lang only appears to have owned one L-4. The combination of features – an oval sound hole, ‘snake’ headstock with diagonal ‘The Gibson’ logo, adjustable truss rod, single pickguard support and trapeze tailpiece with no pins – suggest that it dates from the mid 1920s.

According to collector Hank Risan, the L-4 pictured below dates from 1928 and was played “extensively” by Eddie Lang  “during his heyday.” Unfortunately, Mr Risan offers no further information or documentary evidence to back this statement up. The guitar, which has an oval soundhole, flared headstock, horizontal ‘The Gibson’ logo, truss rod and wrap-over trapeze tailpiece, is virtually identical to the example shown in Gibson’s Catalogue Q of 1928.

By the late 1920s, Eddie Lang had retired his L-4, replacing it with Gibson’s top-of-the-line archtop, the L-5. Today, this is the model that Lang is most identified with and in his hands it would soon be established as the quintessential jazz guitar. It’s no exaggeration to say that every acoustic f-hole archtop built since the L-5’s debut in 1923 – regardless of manufacturer – owes a debt to this iconic Gibson guitar!

We know that Eddie Lang owned and performed with at least three L-5s, a pair of Type Two dot neck models and a later Type Three block neck example.

Lang is pictured with a dot-neck L-5 in several photographs, as well as in a short sequence from the 1930 movie, ‘The King of Jazz’, which starred Paul Whiteman and his Orchestra. While we can’t be certain that all of the above-mentioned images show the same guitar, all have a horizontal ‘The Gibson’ logo, three-on-a-strip Waverly tuners with pearl buttons, a short pickguard and dot inlays from the third fret – a combination of features that suggests the guitar was shipped in the late 1920s (Lang is pictured in a photo of Adrian Rollini’s band of 1927 with an L-4, suggesting that he switched to an L-5 shortly after).

He also appears in a photo of the Paul Whiteman Orchestra (see picture below) with an L-5 that, unlike the guitar described above, has no dot at the third fret. 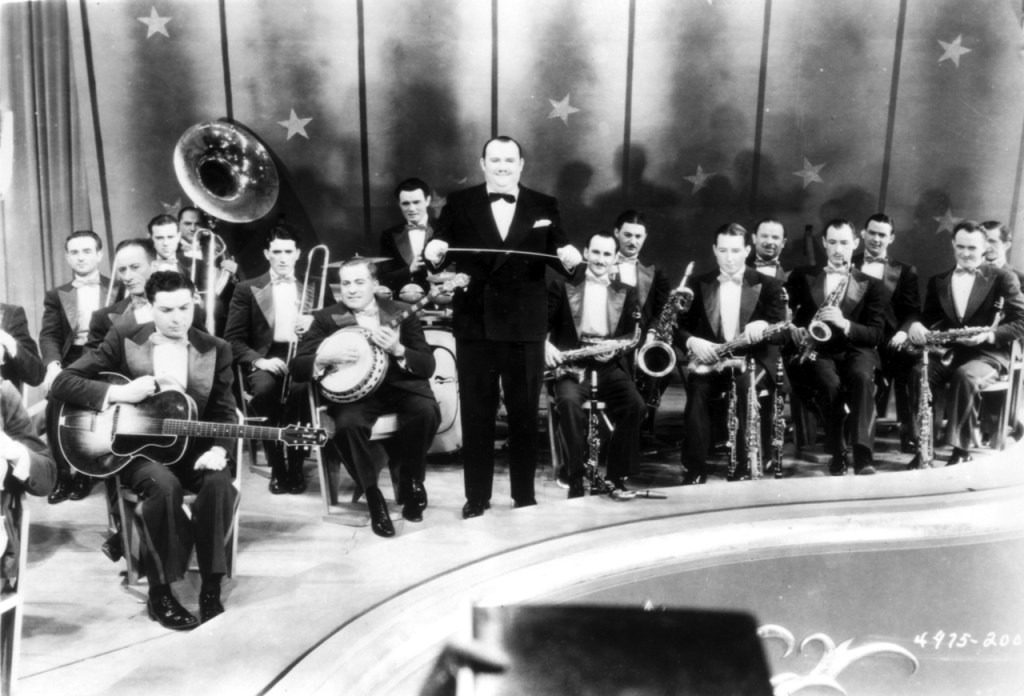 In 1954, guitarist Tony Romano recorded the album ‘Never Before… Never Again’ with fiddler Joe Venuti, who had earlier been Eddie Lang’s musical partner. We know that Tony used one of Lang’s L-5s to record the album – it says as much on the album cover – but accounts vary as to whether this was the earlier dot-neck version or the later block-neck model. It’s also not clear whether the L-5 was gifted to Romano by Eddie’s widow Kitty, or merely lent to him in order to make the recording.

According to the late luthier Paul Hostetter, Tony Romano borrowed the dot-neck L-5 from Kitty (Eddie Lang’s widow).  “Before it could be returned it was stolen from Romano’s car,” he says.

“Some years later the guitar was acquired by Buck Page (guitarist/leader of the Western group Riders of the Purple Sage) and verified as Eddie’s L-5 by noted L.A. repairman Milt Owens, who had worked on the guitar for Lang back in the 1930s,” Hostetter concludes. He suggests that the series of events described above took place in 1947.

This account is at odds with the story as remembered by Tony Romano’s son, Richard Niles: “Joe Venuti took Tony to Kitty and said: ‘Give Eddie’s guitar to Tony. He’s the guy I want accompanying me.’ It was never a loan, but a gift, from Kitty to Joe to Tony.

“It MAY have been in 1947 but the album ‘Never Before… Never Again’ was recorded at Gold Star in 1954. Joe and Tony did many gigs together, but I know they never recorded in a duo format until Johnny Mercer had some free time at Gold Star and asked Dad to find Joe.”

Richard also believes that the guitar used to record ‘Never Before… Never Again’ was Eddie’s block-neck l-5, not the earlier dot-neck example.

Guitar historian Robb Lawrence (author of ‘The Early Years of the Les Paul Legacy 1915-1963’ and other vintage guitar-related titles) broadly agrees with Paul Hostetter’s version of events: ““Kitty said that she had loaned Eddie’s first L-5 (dot neck) to Joe Venuti, who in turn had loaned it to Tony Romano.

“Tony personally told me at our first guitar show at Valley Arts in 1979 that he had left it in his convertible in Hollywood where it was stolen. He always wondered what happened to it.”

Eddie can be seen playing his block-neck L-5 in the 1932 short film, ‘A Regular Trouper’, directed by Roy Mack and starring popular singer and actress Ruth Etting. The guitar has a horizontal ‘The Gibson’ logo, long pickguard and individual Grover 98G Sta-tite tuners.

An L-5 with much the same appearance can be seen in the 1932 Bing Crosby film, ‘The Big Broadcast’.

There are several other photos of Lang playing a block-neck L-5 but whether these all show the same instrument is hard to say.

Two L-5s and a Taropatch

“Kitty told me that Frank Campbell at Gibson had shipped it to them from Kalamazoo in a large box that also contained Eddie’s dot-neck L-5 and an eight string Gibson taropatch ukulele that had her name on the headstock.

“Perhaps the dot-neck L-5 had undergone some repair and was returned along with the new block-neck guitar that Eddie had picked out?”

Robb believes that serial number 88368, is the guitar pictured on the cover of the album, ‘Never Before… Never Again’. “The 1954 Venuti/Romano tribute to Eddie shows the block neck guitar with Eddie’s strings intact as I received it,” he says.

L-5 Serial Number 88368 also displays the same features as the block-neck L-5 that Eddie is pictured with in a number of photos and can be seen playing in ‘A Regular Trooper’ and ‘The Big Broadcast’.

A second Lang-related dot-neck L-5 belonged to guitarist Alvino Rey, who bought it from Eddie Lang in New York in the 1920s. Lynn Wheelwright tells the story: “The first thing that Alvino did when he got to New York was to visit Eddie, who was a guitar hero of the day. Alvino went to Eddie’s hotel room, where two Gibson L-5s that had just been delivered sat on the bed. Eddie was going to send one back, as it had a crack in the f-hole. Alvino asked if he could purchase it and Eddie sold it to him for what Gibson wanted, which was half the retail cost.”

“I met Buck Page around 20 years ago. He played in the Riders of the Purple Sage and was a real cowboy singer and guitarist. We used to jam at clubs together and have a great time.

“Buck showed me his L-5. Supposedly Milt had told him it was Eddie’s ‘practice guitar’. Buck willed it to his friend Cody Bryant.”

“Alvino Rey mentioned to Lynn (Wheelwright) that he had a prototype Super L-5 (the name given to the first Super 400s) that he had bought from Eddie too,” says Robb. “Eddie supposedly didn’t care for it and let it go to Alvino.” Given the fact that Eddie died in 1933 and the Super 400 wasn’t officially introduced until 1935, this seems questionable.

Lynn Wheelwright adds: “Rob must be miss-remembering this. Alvino never said he got the Super L-5 from Eddie. The only guitar Alvino ever associated with Eddie was the late 1920’s L-5. The Super L-5 – which I currently own – is listed in Gibson’s records as having been shipped on June 2nd, 1938. Alvino was deeply into classical guitar at the time, which explains why he ordered the guitar with no fingerboard inlays and 12 frets clear of the body.”

When Robb Lawrence aquired L-5 serial number 88368 from Eddie’s widow Kitty, the guitar still had the strings on it that Lang had fitted! Robb measured them only to discover the following finger-breaking string gauges:

It seems likely that steel strings of this thickness would have put a tremendous strain on the necks of Lang’s L-5s, making credible the idea that he owned several examples.